Kristen Jefferson at Universities in Egypt 2012 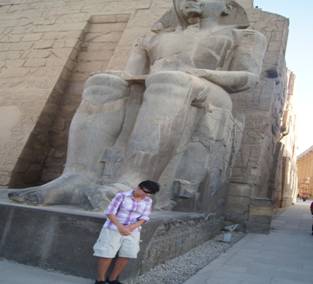 Misr University is a private university in a suburb of Cairo called 6th of October city. The city's namesake commemorates the October 6th war, also known as the Arab-Israeli War. Syria and Egypt launched offensives against Israel on October 6, 1973. An initially successful offensive by Egyptian and Syrian forces ended in a stalemate between the three countries. A peace accord was brokered on October 25, 1973. The city of 6th of October is one of Cairo's wealthy suburbs. Misr University is one of the many private universities present in 6th of October city. 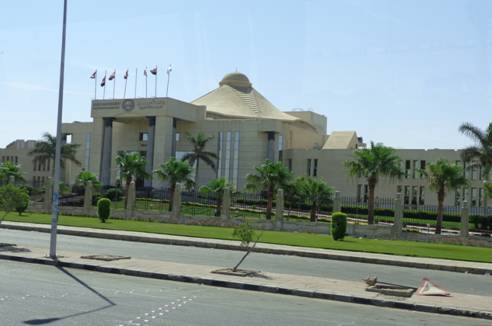 My experience at Misr University was surmised before I even set foot on the campus. A few blocks away from the main campus was a wall that was vandalized. The graffiti said "We care about money". While on the bus, the other students and I laughed at the graffiti's honesty and respected its candor. Others may be angered or find shame in the defacement of the wall but I found it to epitomize my subsequent experiences at Misr University. The students and faculty I encountered at Misr University were incredibly funny, personable and honest. Upon our arrival, we were ushered to a beautiful room set for entertaining. We were offered refreshments and given a summary of the university. 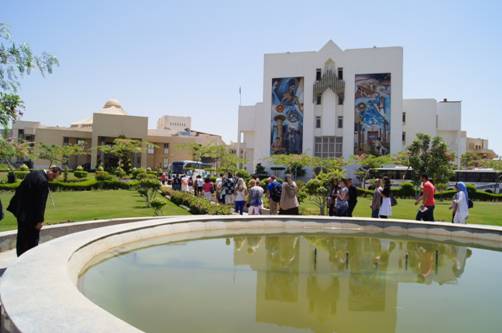 A couple minutes later, the students of Misr University entered the room. The students went around to our groups and spoke with us. Approaching groups of foreign students and striking up a conversation must be daunting but the students at Misr University did not hesitate. If they were nervous, they did not show it. We were appreciative of them coming in to talk with us, especially since they were on a break from school. The conversations we had ranged from current events to personal relationships. We joked about things like customs, music, films, nightlife, parents, teachers, boyfriends, girlfriends, Facebook, Youtube videos, politics and school. 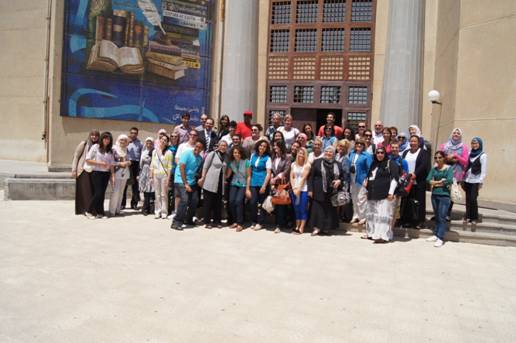 We went to a part of the university that housed statues and artifacts; which the Misr students candidly said were fake but provided a good taste of what to expect at the Egyptian Museum in Cairo. It was refreshing to have an organic conversation with Egyptian students, not one structured around the talking points presented by officials. Even the vice president of the university, Dr. Muhammad El-Saadani, was joking around with us. By the end of our visit, we did not want to leave. We had such a good time with the Egyptian students at Misr University that we simply wanted to hang out with them for the rest of the day. 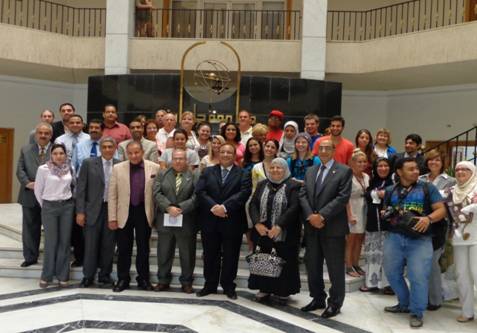 Helwan University is a public university located in Ain Helwan, Cairo. Satelite campuses are located in Giza, El Manyal, Zamalek and Boulaq. The main campus lies in the heart of an industrial community. The area includes factories specializing in construction material, automobiles and furniture. The university provides over 18 fields of study, ranging from technology to fine arts.

The visit at Helwan University was extremely structured. We were herded into a beautiful conference room. It housed a very large finely crafted oval wooden table, lovely tapestry and high tech amenities. 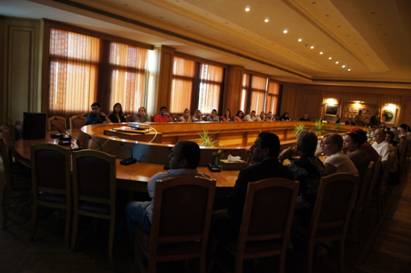 The room was so large that we had to speak into microphones in order to clearly hear one another. The room embodied the experience at Helwan University; structured, formal, intimidating, and impersonal. Formal welcoming commenced and was followed by a power point presentation about the university's many attributes. We were left with the uncomfortable task of speaking with the university's esteemed faculty. 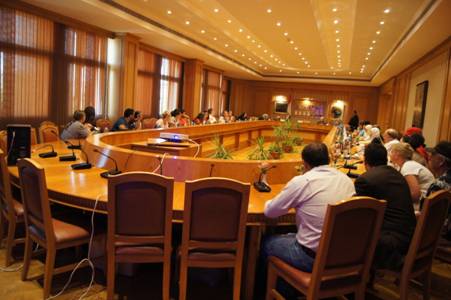 There was a palpable disconnect between the Helwan faculty and ourselves. Many contextual misunderstandings hindered fluid discussion. The conversations were formal and impersonal at best. Unfortunately, we did not get the opportunity to speak with the students of Helwan University because it was finals week.